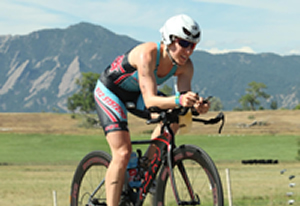 When I saw the Boulder 70.3 listed as one of QT2 key team events this year, I knew it was one I wanted to do. I’ve always wanted to visit Colorado, and I even have family out there that I haven’t seen since they moved out from the East Coast years ago.  Luckily, it fit well into my race schedule, about 6 weeks out from 70.3 World Champs, so I registered for the race and planned to spend the week after training and vacationing.  My Mom was able to join me, as her two brothers live in Fort Collins, where we would be staying for the trip.

The one thing that worried me was the altitude.  You can definitely feel it coming from sea level to over 5,000 ft.  I knew I wouldn’t be able to get out there 10 or more days ahead of time to acclimate, so I took the second best option – get out there 2 days before, to minimize the effects before the race.  I had never raced at altitude before, so I wasn’t sure what would happen!

We got into Denver on Friday afternoon, and made our way to Fort Collins and had a nice dinner with my two uncles and aunts.  On Saturday, I made a pancake breakfast for everyone, built up my bike and took it for a little spin to make sure everything was in working order, and drove down to Boulder for race registration. The rest of the day was spent laying around, eating, and getting some quality time in the Normatec boots.

Checking in at the race site!

Race morning started early, getting down the race morning applesauce feast before making the hour drive down to Boulder.   I was psyched to find out that I had another end transition spot (3rd time this year!) close to the front, making it super easy to find.  And it was right in front of the line of porta-potties, which was both really great, and really gross.  I had just enough time to get my tires topped off, set up transition, and get into the water for a quick warm up swim.  They had a section of the water roped off for warm up, but it was crazy crowded and difficult to really swim through.

Soon, it was time to line up for the swim.  They implemented a new swim start for this race, with self-seeding by expected 1.2 mile swim time.  So, the first group was 30 mins and under, then 30-32, and on and on.  This was great because I would be able to swim with other people around my speed, and not worry about having to swim around slower people from previous waves.  But, it wouldn’t allow me to go head-to-head with the other women in my AG.  Even so, I think the benefits of being able to swim with fewer interruptions made it worth it.

I started in the first group, which began about 10 minutes after the pro start.  The plan was to start much more conservative than normal on the swim, knowing that the swim is where the altitude effects are really felt (comparable to trying to breathe through a straw!  that didn’t sound fun).  So, I put myself a few rows back in the start, so I could build into the swim.  The first 200 yards or so were pretty chaotic, but then it spread out a bit and I was able to swim comfortably.  Having others near me that were of similar speed allowed for some good drafting opportunities as well.  I did manage to start a bit easier than normal, and it definitely paid off.  I never had the “straw” feeling, and really, the only thing I noticed was that I had to breathe every 2 strokes instead of every 3.  I spent a good 10 years only breathing to one side before I mastered the bi-lateral breathing, so it didn’t feel too bad (though I suffered from some epic wetsuit chafing on that side of my neck!). I was happily surprised to see 27 minutes on my watch when I exited the water – it felt a lot longer!  Swim split: 27:12 (1st 25-29) 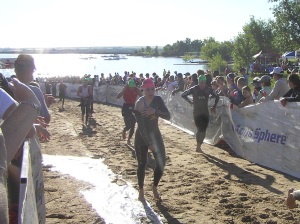 Get me outta this wetsuit!

Into transition, and out on the bike.  The first 5 miles or so have some pretty good climbs, and I worked to start bringing the HR back down a bit and starting to get down some fuel.  I knew there were probably only a handful of women ahead of me after the swim, and I caught about 2 of them right away.  Somehow, I managed to drop my chain not once, but twice in the first 30 miles!  Guess I got a little overambitious on some of the fast downhills.  Other than that, it was a relatively uneventful bike, with a couple good hills and a lot of nice flat and downhill sections that really allowed you to go fast.  I passed one more woman, the last female amateur ahead of me, in the last couple of miles.  I was thrilled to see a sub-2:30 bike split on my watch!  I’ve been spending so much time on the bike, it’s really great to see some of those hard efforts paying off on race day.  Bike split: 2:29:17 (22.46 mph)

Out on the bike course

I wasn’t really quite sure what to expect on the run.  I knew the altitude could slow me down significantly here, so we had a pretty conservative plan.  But, as soon as I started running, I felt great!  I couldn’t believe how easy it felt, at 5,000+ feet and with the temperatures now into the 80’s.  But, 13 miles is still a long way to go, so I mentally prepared myself that this could get much tougher.  The course is 2 loops, and completely exposed, with one measly tree of shade on the entire loop.  I made sure to stay on top of hydrating, and grabbing sponges at every opportunity.  There is one small out and back section about 3 miles in, and as we rounded the turnaround, I checked out the competition.  There was the woman I had passed late on the bike, not more than 15 seconds behind me.  And as far as I could tell, no other amateur women ahead of me.  It was still early, but I knew she was close enough that I couldn’t take any chances.  I was holding around 6:30-6:45 pace, and feeling strong.  By the time we got back around on the 2nd loop, she was nowhere in sight.  Coming into the final miles, I was psyched to realize I was going to go under 1:30 and break 4:30 total time.  I crossed the line at 4:28:12, with a run split of 1:27:21 (3rd fastest run time of all women).  This got me into the top 10 women overall, and 1st amateur.  Full race results 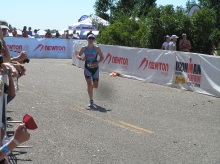 thumbs up to Doug!

It was so great to have the support of my family there.  I saw my Mom, Aunt, and Uncle at the swim start, T1, T2, and on the 2 loops of the bike course.  My Aunt and Uncle had never been to a triathlon before – it was great to be able to share the experience with them!  And my Mom is such a trooper – she stayed with me for hours after the race waiting for the awards ceremony!  It was also good to see my teammate Doug out on the course – his cheers and support during the run loops were much appreciated! 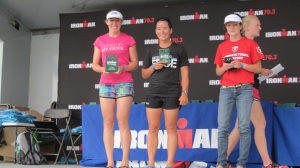 Thanks to Tim and QT2 Systems for giving me the confidence and ability to race in a new environment.  All the details were taken care of, and I knew what I needed to do to be successful out there.  And a big thank you to our awesome QT2 sponsors – especially Quintana Roo for a bike that didn’t give up on me all season, Powerbar & Nuun for keeping me super hydrated and well-fueled so I could race at a higher altitude, and Be Well Boston & Normatec for supporting my recovery from training & racing.  And can’t forget about Brian and the guys at Fast:Splits for keeping my bike running smoothly and helping me get just a little more aero!

The rest of my trip to Boulder was great.  I got to do some great training sessions – Doug even took me out for some climbing in the canyons in Boulder.  I also got to spend some time with my family, with trips to Rocky Mountain National Park, Odell Brewing Company, and downtown Fort Collins.  It was a great week, and I hope to be back in Colorado soon for more training & racing!  I’ll leave you with some photos from the trip…

Me and my QR had some fun adventures out in Colorado 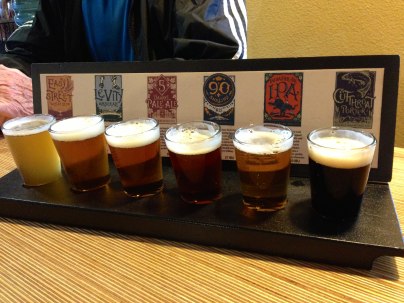 Amazing training ride along Horsetooth Reservoir, just a few minutes from where we were staying in Ft Collins

My Mom and I at Rocky Mountain National Park

My Mom, my Uncle, and me in Loveland