Last weekend was my first multi-sport race at the Wrentham Duathlon!  This duathlon is pretty short – a 3 mile run, 11 mile bike, and 2 mile run, and a great race to start off the season!  It was a beautiful day, and I had great support – my Mom, my sister and her boyfriend made the trip to watch me race.

Me and my sis before the race

I was super nervous before the duathlon since I had never raced on a bike before.  I was worried about getting a flat, drafting/passing, getting in and out of transitions… so much more complicated than just running a road race!

The race is pretty small – about 350-400.  I waited in a bit of a line to pick up my bib, visited “the bike guy” to pump up the tires, then went to set up my transition. I was number 33 – good because I was the second row from the front, so it was easy to find my transition area.  I didn’t need much for this race since it was short and only cycling and running – just my bike, helmet, shoes, and water bottles. 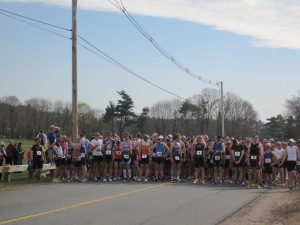 I did a quick warm up jog to loosen up, and headed to the start line. The race started and I set out at a quick pace.  I knew I could do pretty well in the run and would have to make up time there for the bike, but didn’t want to go so fast that I was tired on the bike, so I aimed to keep my mike splits around 6 minute/mile. The run was mostly flat, and I was able to average 6:04 pace.  I came into the first transition as the first place female, but not too far ahead of second place.

The first transition went smoothly, but in looking at my time later was a little slower than I had hoped (1:11).  I came out of the transition and clipped in easily (something I had been worried about!).  I started out pretty conservatively on the bike, just trying to find a comfortable pace.  I got passed in the first mile by one woman, but kept her in sight.  We switched spots multiple times over the next few miles (she passed me on the downhills, and I passed her on the uphills).  But eventually, I took over and she dropped back.  The rest of the ride was pretty uneventful – I got up to some good speeds, though I can tell my downhills need some work (I’m not comfortable yet going at really fast speeds!).

Coming into the bike-to-run transition, two women passed me.  I stayed right behind them, had a decent transition (0:50), and was out for the second run.  I felt like I was moving in slow-mo (note to self: practice more bricks!), but the 2 women were in sight.  I was able to pass both of them in the first couple of minutes, and I held the lead into the finish.  As slow as I felt, I managed to run 6:10/mile on the final leg.

I really enjoyed the whole experience – it was new and exciting, and also got me more confident on my cycling for the upcoming triathlons. I know that’s my weakest spot and I still have a lot of work to do to improve, but I already feel more comfortable in riding in a race setting.  I’m looking forward to adding in the swim and competing in some triathlons soon!

Congrats to the other CRCers that competed in the duathlon!  Lots of age-group medaling and strong performances on the bike and run.